The severe pollution of the subcontinent is building up with time. See how it built up from November1 to November 27, 2017 for the Delhi area. The World’s dams are building up the temperature of Delhi and with it the winds are all drawn to Delhi and bring the pollution along and thus exacerbate the already severe local pollution levels.. See Figures 10Ch10 and 12Ch12. 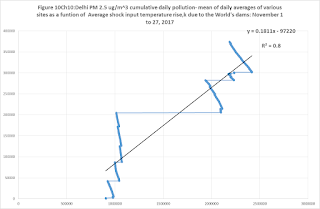 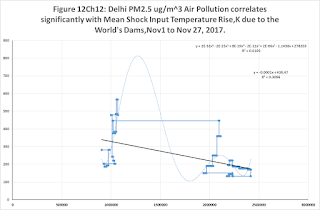 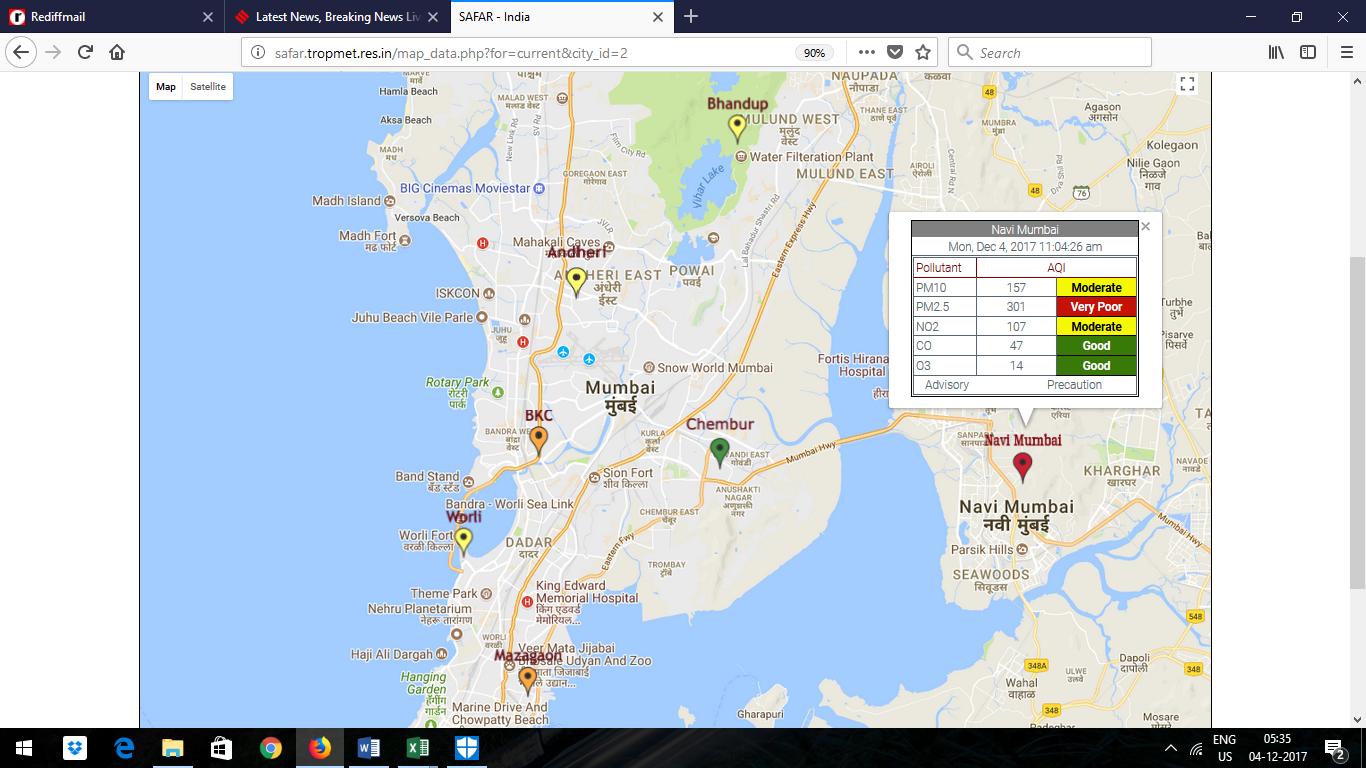 But see:
http://www.hindustantimes.com/mumbai-news/after-cyclone-ockhi-mumbai-breathes-cleanest-december-air/story-Vx9P6DnQVduSGnynz9vMZP.html
On Wed,6 December 2017 in Navi Mumbai:
On Wednesday,6 Dec 2017, Chembur had the cleanest air in the city with AQI levels for PM2.5 at 22, while Navi Mumbai had the most polluted air with an AQI of 71. All 10 locations in Mumbai either recorded ‘good’ or ‘satisfactory’ air quality.
The concentration of particulate matter was well below the safe limit prescribed by the Central Pollution Control Board. As against a safe limit of 60 microgrammes per cubic metre (µg/m3) for PM2.5 for 24 hours, Mumbai recorded 25µg/m3 and 41µg/m3 for PM10 as against safe limit of 100µg/m3 for 24 hours.
And see again on Dec 9: 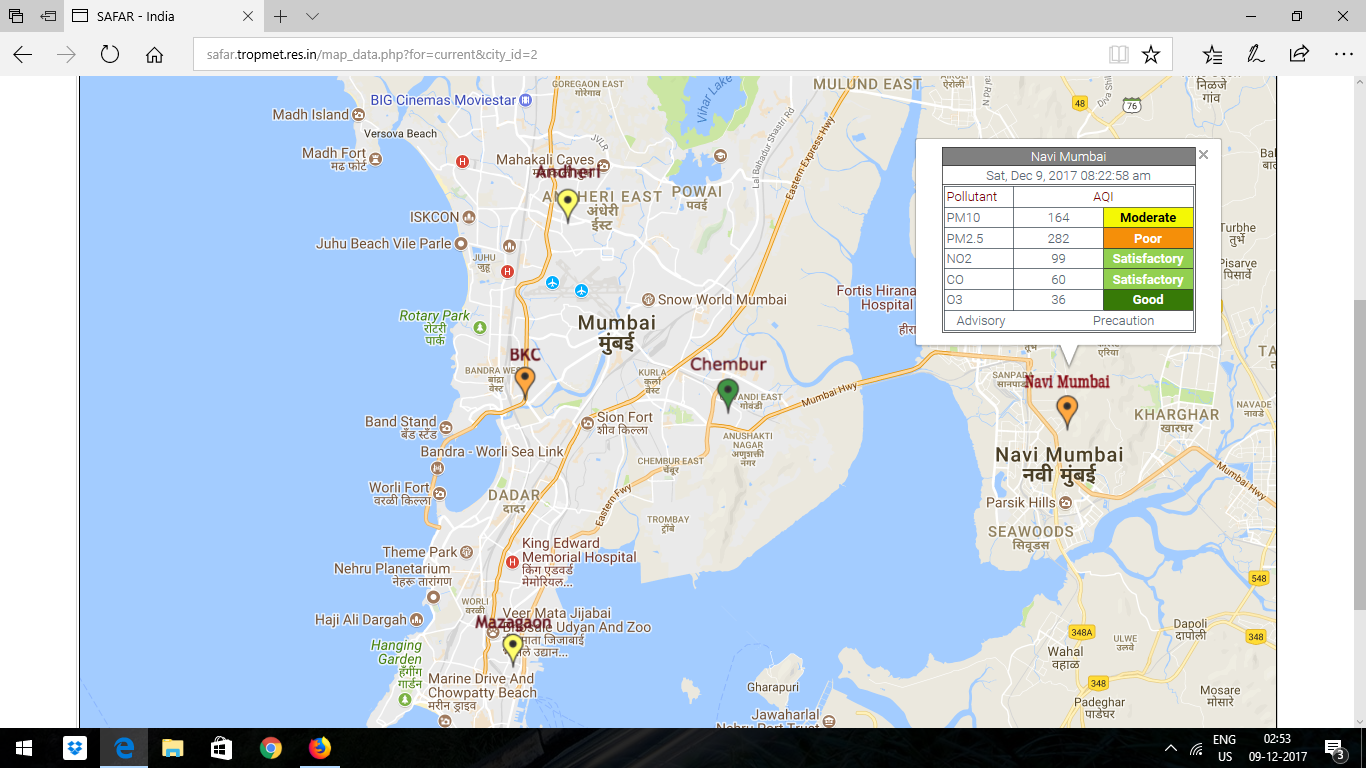 Compare Navi Mumbai Pollution on 9 Dec 2017 with that on 4th Dec and on 6 Dec 2017. The effect of cyclone OKHI is apparent on 6th December compared with before and after. 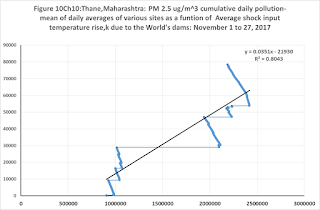 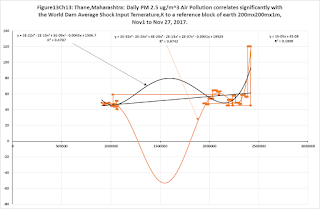 GEOENGINEERING BY MODERN CIVILIZATION CAUSES EXTINCTION
Thus the dams by their direct heating up of the earth are causing pollution  to move from place to place causing air pollution to add to the local pollution. The dynamics act continuously because water is drawn continuously from the dams for meeting needs. Thus geoengineering by modern civilization destroys a solution to meet water needs: forests and rivers and groundwaters and hence destroys life itself by making it impossible to breathe health.
Dams - the cause of climate change!
And see the implications of intensified air pollution for infertility at


https://indianexpress.com/article/opinion/columns/air-pollution-lancet-india-disease-burden-initiative-5600568/
“Air pollution is a silent killer in India, especially in the country’s northern belt.”
Entirely untenable. Let her walk her talk along the Sayyaji Rao road in Mysuru and she will see the truth of her untruth. It is unbearable everywhere.
Mysuru is experiencing an epidemic of cancers due to uranium exposure because of the HEU plant in Chikkadadanahalli. Let her be humble enough to see the truth wherever it appears, in a blog or in a so called peer reviewed article(See Ref 1 and Ref 2 as a sample).
What is required is the rebirth of a normal civilization practicing the principle of Return acceptable to nature and her evolutionary ways (Ref 3).
1. 2010 Recommendations of the ECRR
The Health Effects of Exposure to Low Doses of Ionising Radiation
Edited by:
Chris Busby, with Rosalie Bertell, Inge Schmitz Feuerhake Molly Scott Cato
and Alexey Yablokov
Published for the ECRR by:
Green Audit Press, Castle Cottage, Aberystwyth, SY23 1DZ, United Kingdom
http://www.inaco.co.jp/isaac/shiryo/pdf/ECRR_2010_recommendations_of_the_european_committee_on_radiation_risk.pdf

Posted by Ramaswami Ashok Kumar at 6:07 AM

All eggs in one basket? If one country SUCH AS THE USA kills net neutrality thats all that matters is it? They are killing even food security for us. Let WTO collapse its good for all life. The Butcher of Bhopal with the connivance of traitors escaped into this USA which had better safety design for its factory in Virginia and which feature was deliberately missing in Bhopal. How on earth can we be safe with AADHAR in its present form "imposed" on us? Why is our government acting like the traitors? And they ran away from climate change responsibilities and ignore facts about it. India also dosent want to see the whole truth. Pollution is killing us - yet it is allowing the barons to have a field day.See for example CPCB deliberately hiding data on 24 hr average PM 2.5 in Vashi when it comes to comparison of data. What are our rulers good for? Evil of course.

Dear Devendraji,Modiji
Re: Indian Express Mumbai: Sanjay Gandhi National Park set to lose another eight hectares
January 29, 2018 3:21 am
14-km elevated road coming up; environmentalists question ‘need for so many projects’ in the area
The mutilation and destruction of Sanjay Gandhi National Park or Borivli National Park is against the Gita a million and a half times and is the biggest Moorkhapaddhati ever. Stop it now. It is democratic right of citizens to shoe off these criminals. It is not that we all have to suffer this rakshasattva, but that the idiots at the ruling governance must be given death sentence under fast track.

Today's quote
16 March 2018 06:11UTC
"As they grow older our children go to school,and many of them will make the trip in a familiar American icon, the lumbering yellow school bus. Like most states, nearly 70 percent of the 24,372 school buses in California run on diesel fuel,making them some of the dirtiest vehicles on the road. Researchers found that a child riding inside a diesel school bus may be exposed to as much as four times the level of toxic diesel exhaust as someone riding in a car ahead of it. These exposures pose up to fortysix times the cancer risk considered significant under federal law." - Terry Tamminen.2006.Lives per Gallon: The true cost of our oil addiction.Chapter 1. The breath of Our Fathers. p19.Island Press.Shearwater Books. Washington.

As I survey from my balcony the courtyard of the two building housing society where I live, I notice all all diesel cars: fully occupying all the parking space. Colourful cars made sparklingly clean by the watchmen by water from buckets and labour of wiping.
Today's quote:
"..it is not tobacco that is the biggest threat to human health from the smoke that bl ows in our faces. It is the petroleum industry that is listed by the Geneva Protocol on Air Pollution as the largest single source of harmful air pollution worldwide."- Terry Tamminen, ibid. What is the equation between millions of lives lost,higher rates of birth defects,asthma, emphysema,years shaved from lives and seemingly cheap, comfy independent mobility albeit in congested choked traffic?

It is patently false to state Cars cause only 3% pollution. This averaging is infinitely far from the truth. Because when a citizen on the footpath or road is walking and is hit by PM2.5 and PM10 and Carbon monoxide and other pollutants by car tail pipe exhaust every 0.1 second, its a murderous dose. This is called in situ pollution where the source is at negligible distance from the living being. Thus the haze you see from Kanyakumari to Guwahati is the all -Indian problem. In 1960 when in Delhi I was witness to people dressed in white ride pedal powered bicycles all the way from Ajmal Khan Road to Connaught Place and similarly from all round Connaught Place. Delhi 1960 was spotlessly clean and silent! Tell me tell me grandchild, was that time or the modern time better for you and all life? I find the same haze in Bangalore or Kolkata or Lucknow! Criminals these MPs and ministers who abstained. Before they kill themselves and all Life may Ishwara put an end to such policies through the SC.